THE KINGDOM AT ROWARDENNAN

There is a Kingdom at Rowardennan. It sits on the shingle shore of Loch Lomond under the Ben. I discovered it on a sunny summer day in the 1954. It is a special place for it is my Kingdom and, until I write this, it is unknown to any other.

A family friend had offered to take my brothers to the top of Ben Lomond. So it was, that on that surprising day, I was sat in the back of a fawn Upright Ford Popular. It was one of those glorious days that seem only to exist in childhood. As the smallest, my natural place in the car was the middle of the back seat. This meant sitting astride the transmission tunnel. It also meant that the seat had little padding and the metal over the tunnel was well known to me, as we traversed the bumps and humps. In the Ford Popular, the windows were set high so that my journey was passed in looking ahead through the gap between driver and front passenger.  All I could see was the pale blue of the sky and the occasional whispy cloud.

I was unconcerned by the lack of view for, before the days of radio, we chatted and sang as we went. Also, there was the adventure ahead. It was not intended that I would be going on the climb but I was sure that, when we arrived, this would be changed. They would see I was able to keep up and no-one would have the heart to leave me behind. I was going to climb Ben Lomond.

My hopes were in vain. We left the car at the Lochside and set off together along a lane with cottages to our right. When we reached the start of the path towards the Ben the others waved goodbye and I was left to watch them depart.

As they left for the hills I made my way back to the shore. I knew they were to be away for some time as it was explained that, it was too far for me to climb, would take too long and that when I was bigger, I could come back. On the surface I accepted this but inside I was outraged. I was on the shores of Loch Lomond with nothing to do while my brothers enjoyed adventures.

I wandered along the empty stony shore. I picked up stones and lobbed them into the flat calm water where they made a satisfying plop. Then I chose round flat stones and skimmed them across the surface counting the number of skips. This was fun but arms grow tired, and with no-one to marvel at my skill, I gave up. As I climbed over a ridge of grass jutting out into the loch I found my Kingdom.

At the edge of the water was a tangle of bare tree roots. Years of rising and falling water levels had stripped all soil from the base of a huge tree. The remains of a dead trunk rose from the centre of a platform standing on a multitude of legs. The sun highlighted the bleached wood and between the legs was a warren of dark passages and sudden shafts of light.  I raced forward and clambered to the top.

As soon as I stood by the trunk I could see pirates approaching. My sturdy ship was in danger. The curved sabre plucked from the selection of swords lying amidst the timbers was in my hand. I leapt from the bridge onto the foredeck. The suddenness of my attack drove them back. I swung back into the rigging. From the dark cannon ports below shots rang out. Victory.

No sooner was the ship secure than I realised that I had a castle to capture. High on a cliff it had held out against all attack. Only the brave and daring could lead a successful assault. I moved in shadow. Careful not to dislodge the loose stones which betrayed secret attacks, I crawled into the passages beneath the castle walls. No-one else could have negotiated these tunnels. I held a finger to my lips so that my trusty followers would not speak and give us away. A beam of light from above showed the way to the battlements. I stormed up leading the charge. Cut, thrust. I was unbeatable. Defenders fell in their hundreds round my feet and the cheers of my troops told of my great deeds. The castle was ours.

Lunch interrupted the exploration of the worlds trapped in those roots. I had dreaded being bored and now I grudged the enforced break to eat. Almost as bad as having to stop and return to the ordinary world was having to wash hands in the loch.. What nonsense when this merely meant that the interruption was longer. When having a picnic, what was the point in being clean.

At last fed and watered I returned to my wonderland. I retook the castle. I won battle after battle with the pirates. Changing sides, hoisted the Jolly Rodger and forced my captives to walk the plank.

Thinking that there might be more great places along the shore I decided to explored further. There were places where the shore was eaten away showing weird hollows and tangled roots but none had the appeal of my first discovery. As I wandered I threw stones in the water and ran over the grassy foreshore, but my Kingdom pulled me back. This was my world, only I knew of it, only I could find a way through its darkness and light.

For over fifty years I smile when I think of Rowardennan and of my dream world. I never found it again, and like to believe it was discovered by no-one else.

There is a Kingdom at Rowardennan. It sits on the shore of Loch Lomond in the shadow of the Ben. It is my kingdom and always will be.

THE MAN WHO ATE BUTTERFLIES

Jamie was strange. Everyone knew he was strange even Jamie. Living in a village eating butterflies was not something that could be missed nor considered normal. Not even the most open minded of the residents of Lesser Missen thought that eating Butterflies was normal.

In all other respects Jamie was ordinary; ordinary features, ordinary walk, ordinary talk. It was in this one area that he was peculiar. Well that and his ability to catch butterflies on the wing. You could be talking quietly to him about the latest village news, the close run result in last weeks cricket, the fact that Mrs Jones had been seen with Mr Evans when she definitely did not want to be seen, when his hand would shoot out to pluck a passing butterfly. Gone in an instant. Grabbed, into mouth and…gone.

Strangers had been known to faint. Locals had come to admire the speed and grace. but had to admit that it was rather odd. Somehow it was never mentioned. Conversation carried on as if nothing untoward had happened. Jamie would smile quietly as the whisp of wing or leg disappeared with the flick of his tongue.

The summer of 2005 was hot. The meadow by the stream was a mass of flowers. The butterflies rose in clouds as never seen before. Jamie seemed odder. Now he went hunting. No longer satisfied with the passing morsel he was seen daily lying in the long grass stuffing handfuls into his mouth. His absence from the village shop was noted as he stopped buying food. His favourite chocolate gingers sat undisturbed on the shelf. He still smiled and nodded and on occasion still chatted but it was clear that his mind was on the meadow. Always his eyes strayed towards it. While it was light he was never far from it and its butterflies.

He disappeared at the end of July. No-one was sure exactly when but the last definite sighting had been at the village dance. He usually enjoyed the dances but it was remembered that on that evening he had been withdrawn. He had told Mr Wise that the light was bothering him and that for the last few days he had been overly tired. Mr Thomas thought he had mentioned going to his sister in Greater Missen. It was September before the villagers began to worry. They telephoned his sister Jessie who said that she had not seen him or heard from him since the spring. She was not worried. Jamie was a bit odd. He would turn up in his own time.

During Christmas of 2005 the miracle was reported. At the Watch night service an angel was seen by the villagers of whom at least three admitted it. For all of two weeks there were reporters, ministers, priests and weirdos investigating the claims. There were those who said they saw the angel again but without positive sightings interest waned and the outsiders drifted away.

The summer of 2006 like the year before was hot. The butterflies returned to the meadow. Some saw a large angel like butterfly join the throng by the stream but after the Christmas experience they kept these things to themselves.

The broken chrysalis in Jamie’s house would not be found for years.

This short story appeared in The Ranfurly Review September 2008

CONVERSATIONS WITH A GHOST

There is a half world between Death and Reality. It is inhabited by the mind, somewhere before dreams, somewhere after understanding .

We have glimpses of that world. Spaces open and it is there but clouds form and it is gone. We may protest that it is myth, a figment. We are rational. We are not seduced by any other place, time, spirit: but we lie.

In the depth of night, in loneliness, in trouble, in despair, we fumble for it. Pull back ancient tales, beliefs supposedly discarded, loved ones held close.

Sebastian Symes, rival of Sherlock Holmes, searches for a butcher’s missing daughter. He and his companion Major Ritson encounter a Hungarian Count, a religious relic and a company of Hussars, in a tale of Victorian morality. 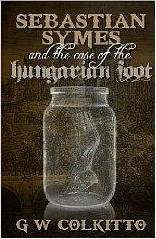 He thumped on the counter of the FORTIAN  GIFT SHOP as the owner shuffled from the shadows.

‘You can give me my money back.    And compensation.    But be quick because  the police are after me.’

‘I bought this Medusa doll here.’    He lifted a bundle tightly wrapped.  ‘Supposed to turn things to stone.   Bloody faulty.   Used it on two panthers in the zoo.    Sold them to a punter as marble statues.      Now they’ve bloody unfrozen and eaten him. Police are after me for selling stolen, dangerous animals’

‘Don’t dare laugh.   Gave him an invoice.’   He grabbed the owner as a dry chuckle formed.    ‘Any sound and you’re mince.     You sold this crap Medusa that lets things come back to life.’

‘You didn’t read the instructions.     The dial on the back sets the ossification level’  He reached into the parcel.    ‘I’m a fair man.     If you wish to make a claim I must fill in a form.     Read the number under the hair-line to me, please.’

He took the parcel from the stone hands and hung Gargoyle for sale  under the grimaced face.